If you're happy buying cheap, processed meat from your local supermarket, you might want to stop reading...

The truth is settling for cheap factory-farmed cuts of meat could be making you sick.

You see, while the term "antibiotic resistance" is thrown around a lot by the media these days, the implications are clear: The more exposure bacteria have to antibiotics, the more likely they are to develop a resistance. And the more resistance they have, the more difficult it is to develop medicines to fight them.

Without appropriate and controlled antibiotic usage, we end up with "super bug" strains of bacteria that can put you in the hospital... or worse.

Unfortunately, the same can't be said of the factory farms that are pumping your grocery store beef, chicken, pork, and turkey full of antibiotics.

According to The Pew Charitable Trusts (the same non-profit most well-known for public policy polling), which recently crunched some FDA data, almost four-fifths of antibiotics consumed in the United States are going to the meat industry.

The majority of those antibiotics are being used in what are called Concentrated Animal Feed Operations (CAFO for short). These CAFOs can be found all over the country, but you'll see a huge concentration of them in the Midwest and Great Plains states.

They have one common goal: to produce the most meat in the shortest time possible using as little money as possible.

Economically, that makes sense. It's what any sane businessman would do. But these particular businessmen are putting their profits over the health of the American people.

CAFOs supply most of the grocery stores and processed food manufacturers (hot dogs, deli meat, etc.) in the United States.

And it's no wonder they need to pump their livestock full of antibiotics...

What you're looking at are two conditions that make disease (and the necessity for antibiotics) rampant among factory-farmed animals:

1) Just as people are more likely to catch a cold or the flu when they spend more times in crowded shopping malls or airports, so too are animals more likely to spread (and catch)  disease when they're crowded into a small area together. There's no room for the healthy animals to escape the diseased ones, and so disease must be controlled by regular antibiotic distribution. 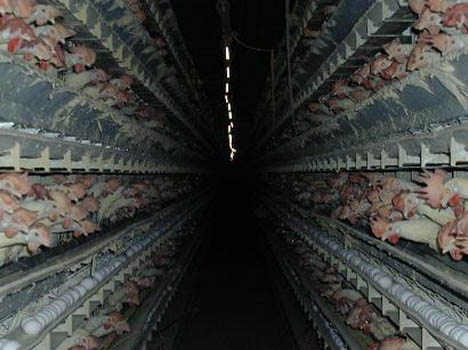 2) With all those animals sitting there eating and drinking, there's going to be a lot of animals urinating and defecating.

Since the animals pretty much live in these crowded conditions until they're ready for slaughter, they're going to be standing in their own crap — a cesspool of bacteria — for a good amount of their lives. And some of that bacteria will make its way with them to the slaughterhouse.

In addition to these two issues is a problem you can't see — namely, what the animals are being fed.

Neither chickens nor cattle evolved to digest the massive amounts of grains (primarily corn or soy, which is technically a legume) they're forced to eat in the CAFOs...

Cows prefer grass, as that's what their four stomachs evolved to digest. The health of the cows depends on consuming a primarily grass-based diet...

Likewise wild chickens, turkeys, and pigs have a diet rich in nuts sprouts, berries, and insects, and some grains.

When animals consume a diet of food they did not develop the digestive system to properly break down in such large quantities — not only does it cause serious digestive issues, but there is a cascading effect of health problems. In humans, it manifests itself as obesity, heart disease, and even a compromised immune system in some people. It's not so different in the animals that you eat...

I'm sure you've seen what I'm talking about on the news before: constant recalls for Salmonella-contaminated chicken; headlines about mad cow disease; and swine (pig) flu outbreaks seem to happen more and more frequently.

That's why industrial "farmers" need to pump their animals full of antibiotics — because it takes a lot to prevent disease in their animals so long as they're living in overly-crowded conditions and swimming in a cesspool of bacteria-ridden feces.

But not even that can prevent outbreaks of bacteria on your meat. If anything, it just makes it more likely.

The solution? While it may be a bit more expensive, try to buy organic, non-grain fed meat and eggs.

The best place to do this is at your local farmers' market. Make friends with the butchers and meat vendors there. Ask them questions about their farming practices — or, better yet, ask to visit their farm. Many of them are happy (and proud!) to show you the results of all their hard work.

If that's not an option, many supermarkets have a section for organic and antibiotic-free meats and grass-fed cattle.

Either way, you'll not only avoid the nasty bugs found in today's factory-farmed meat, but you'll also avoid the hormones used to fatten the animals.  Plus you'll get a lot more healthy fats in your meats when the animals are fed what they evolved to eat.

I know it can be hard to justify the immediate cost benefit of buying better quality meat. But the long-term improvement on your health and wellness will be more than worth it...

1 We Salute You Today 2 Sex Talk: How to Be a Stallion in... 3 The Bright Side of THIS Black Drink 4 Why Your Health Requires a Million... 5 What Every Coronavirus To-Go Bag...

1 We Salute You Today 2 Sex Talk: How to Be a Stallion in... 3 The Bright Side of THIS Black Drink 4 Why Your Health Requires a Million... 5 What Every Coronavirus To-Go Bag...
4 Tips to Protect Your Body and Extend Your Life
We're making one of our special reports FREE today! Turn your body into a fortress that protects against a dangerous muscle-wasting disease with a 53% chance of striking by age 83. Just tell us where to send your copy.
Sign up to receive your free report. After signing up, you'll begin receiving the Clear Health Now e-letter daily.
Learn about Clear Health Now and our Privacy Policy