Perhaps the proudest moment I've had in my years running Clear Health Now is when my colleague Dave cornered me in our office kitchen...

He told me he had been reading some of our columns from Dr. Colin Champ about the virtues of ancestral eating and the power of eating fat — not shying away from it — and decided to try it out for himself.

A year later — he has seen some unbelievable results.

Here's Dave before and after: 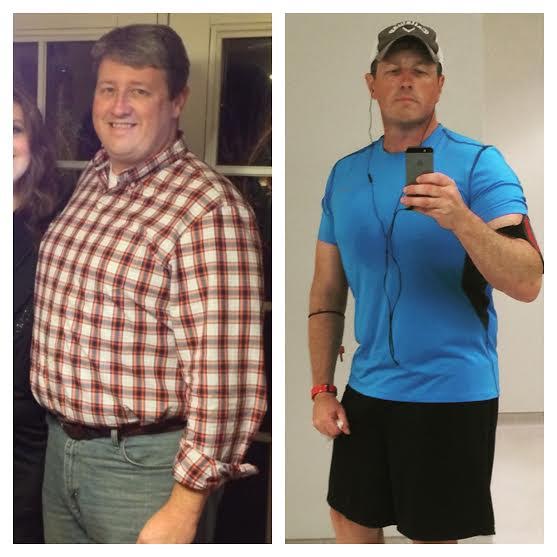 His story was so inspiring, that I thought we should sit him down so he could tell us exactly how he changed his life from the advice we give in the newsletter.

CHN: Dave, so tell me a bit about your story and why you decided to make a commitment to getting healthy?

Dave: Well, it all started a couple years ago, when I had a sinus infection that wouldn't go away and found myself at Urgent Care.

Now, I knew I had put on some weight, but wasn't quite aware of exactly how much weight.

But during the process, they weighed me and I was 282 pounds — the heaviest I'd ever been in my whole life.

They also found my blood pressure was 170/100 — which is really, really high. So the doctor was far more concerned about my blood pressure than the sinus infection. He asked me if my fingers tingled, do I get dizzy...

He gave me a prescription and I went right away to get Lisinopril tablets. Now, that brought my blood pressure down pretty quickly.

But I wasn't too keen on staying on medications for the rest of my life...

CHN: Is that when you decided to make some changes?

Dave: Actually, not quite...

Soon after all of that, I saw a picture of myself with my daughter on the night of her homecoming dance... and I realized wow, the doctor is right: “I'm fat.”

Between that and the blood pressure scare, I knew I had to make some serious changes.

CHN: Why did you decide to go with a low-carb, high-fat diet, versus say the more popular "calorie counting", low-fat diet?

Now, I knew I couldn't go vegan — I love meat. So that wouldn't work.

Thankfully, I don't have much of a sweet tooth, but I do really enjoy meat, cheese, nuts, etc.

So I just started focusing on something I could actually do. I wanted something that would satisfy my cravings.

Which turned out to be Paleo, Primal, Ancestral, whatever you want to call it. I kept reading about it on Clear Health Now every week, and finally dedicated myself to it.

And it has totally worked...

CHN: What did your eating schedule look like? Can you give me a snapshot of your typical breakfast lunch, dinner, snacks?

Dave: I was constantly eating everything — yet I was still constantly hungry.

Breakfast would have been an egg sandwich, oatmeal, cereal... something like that.

Lunch would be either two peanut butter and jelly sandwiches or a turkey sub and some chips. And the ironic part is that I would try and cut my sugar consumption with a Diet Coke.

A snack in the afternoon would be a candy bar.

And dinner would be whatever my wife cooked up at the time. We had young kids and time was at a premium.

So we'd have a Stouffer's lasagna family tray in the oven — a very calorie-dense meal that I'd eat a huge portion of.

Any kind of processed meal really, or it would be fast food, or going to dinner at some chain restaurant.

CHN: And you were still hungry after that kind of meal?

I'd stuff myself at these dinners, but was always hungry afterward. So I would be snacking late at night — leftovers, pretty much anything I could find in the fridge.

CHN: Was that more out of habit, or do you think you were craving nutrients you weren't getting?

Dave: It was a bit of both actually... I think some of it was emotional eating, but now I know it was much more than that.

What I've learned now, was that my glucose was elevated and with your body having elevated glucose, you are a slave to a constant feed of carbs. It's a self-fulfilling prophecy. It's constant hunger, then crushing it with carbs, you know — rinse and repeat.

It's a vicious cycle that is really hard to break out of with typical diets... almost like a cocaine addiction or something. You're always chasing the carb high you can never, ever satisfy.

How To Start a Paleo Diet

Join Clear Health Now today for FREE. You'll learn what to eat, when to eat it and the 5 foods to avoid like the plague. Become a member today, and get our latest free report: "The Paleo Diet Starter's Guide: Lose Weight, Feel Great, and NEVER Go Hungry Again."

CHN: So, what is your normal diet now?

Dave: I start the day — around 6:30 — with two eggs and organic sausage — that's breakfast right there. I try to keep it simple.

That usually keeps me good until 10 or so, when I'll have a light snack. So I'll eat some almonds, macadamia nuts, or pumpkins seeds that will tide me over until lunch time.

Or I'll have a helping or two of almond butter if need be.

For lunch, I usually do a big salad with grilled organic chicken, extra virgin olive oil, and some balsamic vinaigrette and a whole avocado. Maybe some feta or goat cheese tossed on there...

That always keeps me full until dinner time.

When dinner rolls around, I try to go heavy on the veggies: cauliflower, broccoli, Brussels sprouts with bacon...

And a big helping of protein: which is usually free-range chicken, wild-caught salmon, and grass-fed steak. We usually split a cow from a local farm every year so we have great meat on hand all the time.

CHN: I noticed you didn't mention anything about fruits. Is that due to the sugar content?

Dave: Yeah, while fruits are fine with the paleo-type diet in moderation, they are not recommended when you are trying to lose weight.

After taking off 40 pounds or so, I've really been trying to be strict about the sugar. So I watch my fruit intake — if I do, it's the lower glycemic fruits like berries.

And definitely no fruit juice, it's too high in sugar with no fiber.

CHN: I know at the beginning you were able to drop weight without much exercise. What are you doing now, exercise wise, to get over that hump?

Dave: No, I wasn't exercising at all really.

I talked to some personal trainers and they all said the same thing: “Muscle bulk comes from the gym, defined abs come from the kitchen. That's how you really get the fat off.”

So that's what I've been doing. Getting the fat off was surprisingly easy.

But then I reached a plateau...

I wanted to get into serious shape so I started slow and tried to improve my muscle tone. I did really basic stuff. This year, my family joined the Y and started going religiously. I usually go to the gym at least three times a week. Here's what I do...

Every session I do 20 minutes on the elliptical, and I do high intensity interval training (HIIT).

That is a three-minute warm up, and then intermittent sprints where I go for 30-second bursts where I go as hard as I can for that 30 seconds and then take a one-minute rest. My heart rate gets to the 150-160 mark...

After that I'm usually not tapped out, so I lift weights for another hour or so.

I feel so strong now that I'm maxing out most of the machines I'm using, and need to move on to the free weights.

CHN: Does that wear your body down at all?

Plus, I'm not trying to run marathons...

I've read that the first person to run a marathon dropped dead immediately afterward. That's not a good sign. I've heard it called “chronic cardio” — where you are wearing your body down and destroying your joints.

The human body wasn't meant to run three hours straight. The primitive man was trying to run quickly to get food, but then backing off. They never ran for miles and miles like that.

Going back to the ancestral stuff, high intensity training mimics what our ancestors did.

It's lowered my heart rate — now it's just below 60, which is way better than it was.

CHN: So how has your doctor responded to your progress?

He's actually evolved over the years — unlike a lot of other doctors. If I came to him 10 years ago he probably would have chastised me, but when I told him of my approach, he fully supported me. He even mentioned a study from Harvard that backed up what I wanted to do.

I've been going to him for a decade. Now, while he fully supported what I was doing based on my results, he did recommend that I go on statins, which I did not want to do.

I've heard all the horror stories about statins...

So, I figured if I keep up on my current program, I'd be able to avoid that entirely. But by doing simple things like eating avocados regularly, I actually dropped my bad cholesterol by 40 points.

When I went in for a checkup, the physicians' assistant couldn't believe it. She said “Wow, keep on doing whatever you're doing.”

CHN: Wow, that is incredible. So Dave, what are your end goals? What would you like to be able to do physically that you couldn't do before your transformation?

Dave: First off, I want to be able to do ten pull-ups — I've never done more than one in my life.

I also want to drop my weight to 190 pounds, which is about 50 pounds from where I am now.

If that all goes well, my final end goal is to get back on a surf board. I haven't surfed in over 20 years. I'd like to do that before I turn 50. I had a friend in flight school back in the day who surfs in LA now. I pitched a trip where he'd be my surf guide.

To cap off my journey, I want to catch a monster wave by the end of next year...

CHN: Surf's up Dave, thanks so much for sharing your story with us.

Dave: Thanks to you guys for helping to inspire me!

We're going to have Dave check in with us every so often and share anything new he's doing to keep up his progress.

1 Kill Stress in Five Minutes With This... 2 CORONA 2.0: Are We at the Tipping Point? 3 Why You're Always Tired 24/7... 4 Nature's "Bone-Mending" Herb? 5 We Salute You Today
4 Tips to Protect Your Body and Extend Your Life
We're making one of our special reports FREE today! Turn your body into a fortress that protects against a dangerous muscle-wasting disease with a 53% chance of striking by age 83. Just tell us where to send your copy.
Sign up to receive your free report. After signing up, you'll begin receiving the Clear Health Now e-letter daily.
Learn about Clear Health Now and our Privacy Policy